The Words We Speak

Posted on March 5, 2020 by unearthingthesacred 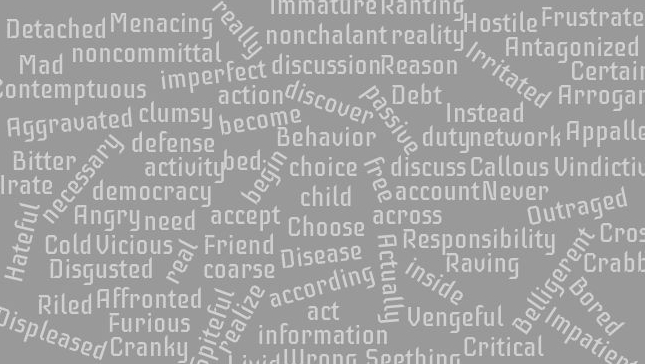 I have this memory of a question that my teacher asked. This may have been 6th grade. The teacher asked “what words do you just really hate?” Kids were raising their hands left and right, including me. But, my hand eventually went down as I realized how I interpreted her question was not only vastly different from how she meant it but different even from how everyone else in that room interpreted it. Seriously. I was, seemingly, the only one who interpreted her question as the meaning behind words versus how a word was written or sounded. So, while my brain was fixated on words like ‘hatred,’ ‘detest,’ and ‘discrimination,’ theirs were shouting out ones such as ‘Massachusetts,’ ‘lasagna,’ and ‘colonel.’

We each have our own unique understanding and perspective of the world. This goes for how we interpret the things others say, or even what we individually say. Words carry certain vibrations for each of us in very uniquely different ways. Our perspectives of the world are formulated by how we operate whether it’s more from an emotional, mental, kinetic, visual, or auditory standpoint. How we interpret things can define what is our primary operating system through our senses.

When we think on this question “what words do you just hate?” in which we are asked to interpret another’s meaning, it can sometimes cause a certain vibratory response within us. For me, certain words will bring up a nails-on-the-chalkboard vibration with an emotional reaction to it. For other people, certain words can have them physically reacting in disgust or excitement. Many, if not most of our words in this society have been misconstrued through manipulative means. The original meaning of certain words now have this glossy facade to cover up the reality of its truth. When we can not only honor the truth of the meaning of our words but understand the historical context as well as emotional and mental impact of those words with integrity, it is only then that we can even begin to fathom reality versus facade. And, boy, do we have such a mask over the truth of all that is. We say one thing but mean another. We claim certain things are truth and factual when in reality the opposite often is. It’s like when we see someone for the first time and have an intuitive understanding of who they are but they end up trying to tell us a different story that doesn’t match up with that inner knowing of ours.

[On a, sort of, side note… Over the years, I’ve heard the excuse of being too drunk to mean what one says since that person wasn’t fully (if at all) consciously aware, or being too angry to understand what hurtful things are said. The problem with this that I’ve found over the years are two things. One, on a certain level, we always mean what we say. And, two, most people don’t seem to make a conscience effort to choose their words or think about the meaning of those or the impact, emotionally and mentally, that they will have on another.]

When we can bring ourselves into the vibration of understanding how words (as well as other things in life) affect us, we can then have the ability to expand that into accessing an empathic ability of being able to comprehend on a fundamental level how others are perceiving our words (and/or actions.) Being able to pick up the subtleties of the internal perceptions of others can only be tapped into when we access the silence within our own being. Finding the silence within allows us to not only tap into the content of our own souls but to also connect with the authentic nature of another’s soul. When authenticity is found through going within the silence and tapping into that zero-point field, the authentic vibration we emanate can be understood by others as truth on a soul level.

In an earlier post, I wrote about Light Language. Specifically, it sounds like mumbo-jumbo and yet, if you employ it or listen to it spoken, you can feel a shift in your entire being, particularly if you’re in-tune with a strong energetic and spiritual awareness. You may have heard it originally as “speaking in tongues” and associated with “Bible-thumping, snake-wielding” Christians, like I had. It was always something that I was taught to believe as just weird, and, if honest, frightening. But, like my previous post stated, it wasn’t until I heard one lady speak it on Youtube that I realized that I was already speaking it. (Oddly enough, it may explain why my last cat would get really excited when I spoke to her in this way.)

Recently, I decided to try it out again and I had an automatic phrase pop out that I have easily remembered and use as an opener for whenever I wish to speak it. This seemingly nonsense phrase? Kumbra-ka-ka. Over the course of two weeks, I wondered why this phrase kept popping up every time I began, so I decided to meditate on it by asking what is its meaning. Immediately, the phrase “I spell, therefor I cast” came into my head. Strange wording, I thought. Sounds like I’m Wiccan (which, though, I am knowledgeable about many religions or practices, I have never truly aligned myself with any.) Simply put, it means “to bring forth through the spoken word.” I find this rather fitting for this post, don’t you? If you’ve never tried Light Language, feel free to use this phrase of Kumbra ka-ka (pronounced: khoom brah kah kah) to get you started by repeating it until something else pours through.

Light Language can help you readjust your soul connection and energetic vibration towards not only your spoken words but your thoughts, feelings, and connection with the world around you. Below, I’m including an audio of my use of Light Language. I sound like I’m breathing heavily or very emotional which is caused by the rush of language that’s pouring from me. I was having a bit of difficulty keeping up with it and even laughed a couple of times at the silliness I was feeling, even though I didn’t feel as if I could stop it. It’s actually an excellent meditative tool as it doesn’t allow your mind to fixate on anything concrete. Let me know how it turns out for you. I would love to hear your experiences.

[Word of note: Not all Light Language will sound the same. Some of what comes out of my mouth may sound Nordic, Asian, Native American, and, once, I had a deep guttural voice that sounded Maori to me. Don’t critique it, just let it flow.]

This site uses Akismet to reduce spam. Learn how your comment data is processed.